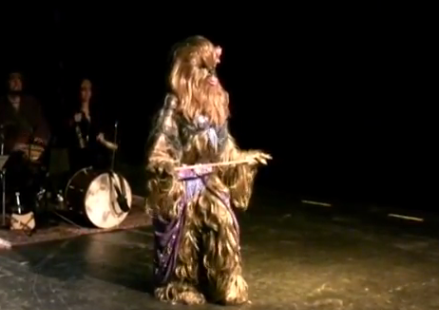 Several months ago Deserae, a wonderful bellydancer dancer I’ve known for years and who I’ve finally had the pleasure to play for about a year ago, decided she wanted to do a performance as a Wookiee bellydancer.  Back in March I recorded an excerpt of what such a Wookiee bellydance tune would sound like.  I pulled some phrases and words from the Star Wars Galactic Phrase Book and Travel Guide and created a sample audio with drums, cello, cow horn and vocals.  I titled it “Muaarga” (the Shyriiwook word for “Peace”) and posted it to my Soundcloud account:

A couple months ago Deserae asked if my band, the il Troubadore Klingon Music Project, could come to Chicago to play for her at an event called “Raks Geek” which took place at the Viaduct Theatre.  Basically billed as a Geek Bellydance event–probably the first “official” type of event dedicated solely to bellydancers and movement artists who happen to be big Sci-Fi and Fantasy fans.  Most of the event on Friday Night (the Saturday Night show was not filmed as far as I know) was filmed by Bob Nicholas.  We ended up playing two tunes for Deserae (as well as short sets before the show and during the intermission) including the Wookiee bellydance tune and a Klingon Opera-Ballet tune (“be’ joy’ luqaSa”) I had written for another dancer a couple of years ago.  Here is the Wookiee performance:

And here is the Klingon Bellydance performance:

Apparently the video has since gone viral.  While the video above, which I’ve posted to my personal youtube account only has some 8,000 hits (earlier yesterday it had roughly 2,500 views) the original video, which was posted here, currently has 130,000+ views (up 15,000 views from yesterday afternoon).

I got an inkling something was afoot on Tuesday when a student I had known from the High School I do cello sectionals and teaching at told me that a video of il Troubadore was on the front page of Reddit, the self titled “Front Page of the Internet.”  Doing a quick search didn’t turn up any videos of il Troubadore mainly due to the fact that it was the Raks Geek video (linked in the previous paragraph) rather than the one on my personal youtube site.

Yesterday morning the Geeks Are Sexy website had posted the video which I found through its facebook page (which has close to 400,000 followers).  Within a couple of hours it was shared over 200 times by various facebook users.  As I was doing searches around the net, I did finally find the Reddit link as well as several other sites, forums/bulletin boards, and blogs which had been posting various links to the video within the past day.  Some of those include sites which report on viral videos (such as Viral Viral Videos; Metatube; Break.com; Viral Kings), news sites (G4TV’s Attack of the Show & Around the Net; MSN Now; Right This Minute; New York Magazine’s Vulture), and other popular internet meme sites (Cheezburger; Know Your Meme; Dlisted).

I’ve had people tell me they’ve seen me on tv as some of the news sights (listed in the previous paragraph) have syndicated their short segments or are associated with more traditional networks.  Someone in Alabama mentioned seeing the Right This Minute clip and Fox 2 news in St. Louis apparently aired an excerpt as part of a segment of Tim’s Take.  ThinkGeek has tweeted it (roughly 600,000 followers) and Jeri Ryan posted it at her Google + page (whether this is the actual Jeri Ryan is unknown to me).

When I conceived of this piece, I wasn’t thinking it would lead to some that could potentially become viral–but I think that’s half of the point I try to make at this blog.  We just don’t have as much control over potential audiences as we would like and more often than not it’s easier to pull from a pre-existing one than to create one anew.  With 140,000 + hits to the video(s)–not including how many folks saw the actual news segments, it will be interesting to see how far the original video goes over the next few days!

Credits for the video: 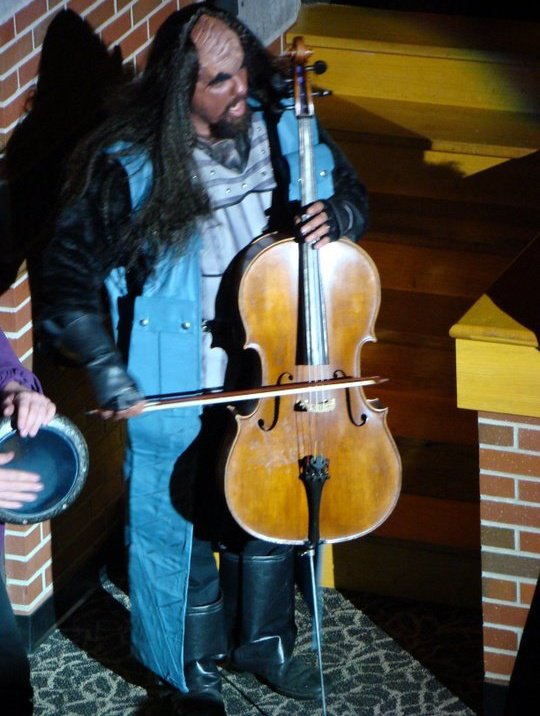 So, as I mentioned in the previous post, there is an embarrassment of riches as far as performing options are concerned, if you’re willing to think outside the box.  The past few years I’ve been playing the Sci-Fi/Fantasy circuit.  I hesitate to call it the “Sci-Fi/Fantasy Convention circuit” if only because some of the best paying gigs I’ve gotten recently happen to be at organizations outside of the Convention circuit proper.

And some of that has started to creep into the so-called ‘high arts’ realm with organizations such as Symphony Orchestras playing themed shows dedicated to particular Sci-Fi or Fantasy franchises (e.g. Lord of the Rings, Star Wars) as part of their pops seasons.

On the whole, however, there’s always been music at conventions–even if it only consisted of filk music.  Part of the Klingon schtick is as much act as play and the idea came to me as a whim after il Troubadore started playing Sci-Fi conventions at the request of some bellydancers.  We decided we needed our own act and schtick, thus was born the il Troubadore Klingon Music Project.

Ok, so I talk about the short series of events from bellydancer request to Sci-Fi convention to developing a full blown Klingon Band personae as if it’s an everyday thing.  But seriously, for me, it is.

That’s the specific issue at hand here.  Over the years I’ve heard all manner of musicians grouse about the lousy economy and the lack of work.  And here, I’m talking primarily about those musicians who do not hold full time or professional positions as musicians–this includes freelancers, but also just your normal everyday band musician.  I know I’ve brought up this issue plenty of times in the past, but don’t want to flood this post with a ton of links.

END_OF_DOCUMENT_TOKEN_TO_BE_REPLACED

As I mentioned in my previous post, I was up all night finishing a Klingon costume.  I’d been working on it intermittently for a few weeks now but needed to get the bulk of the work done by today.  I haven’t posted much here about the il Troubadore Klingon Music Project as it’s still a work in progress, but it’s close enough to our first official event that I feel I can start to blog more about this.

We’d been playing Klingon songs since 2009 and began playing conventions with other tunes from popular Sci-Fi franchises (e.g. Star Wars, Dune) and thought “what they hey, let’s do a Klingon Ballet” since we often work with dancers.

So last winter we started developing the Klingon Music Project.  As our mission statement says:

il Troubadore, known on the planet Qo’noS as bomwI’pu’ has been performing tlhIngan QoQ (Klingon music) live since 2009.

il Troubadore’s mission is to record and perform all existing songs in the complete musical oeuvre of the Klingon Empire. Everything from the grand ghe’naQ nIt to the vernacular may’ bom and HIvje’ bom will be able to be heard and appreciated by Terran audiences throughout the planet Earth.

So over the past few weeks we’ve all been working on Klingon costumes to go along with the music, and eventually the ballet, wa’SaD ram wa’ ram je, itself.  As you can see from the transliterated Klingon title of the ballet now you know why I mentioned the search phrase “sad ram” that brought some poor unsuspecting soul to a blog post about the Klingon Ballet.

As it stands, there just aren’t enough fully fleshed out Klingon tunes from the various series and movies, so we’ve been writing and developing our own Klingon music.  Here’s a tune I wrote and that we performed at ConNooga in Chattanooga, Tennessee in February of 2009.